Source: National Geographic | The Great Pacific Garbage Patch is a collection of marine debris in the North Pacific Ocean. Marine debris is litter that ends up in oceans, seas, and other large bodies of water.

What is the size of the Great Pacific Garbage Patch?

The size of the great pacific garbage patch is around 1.6 million square kilometres, which is twice the size of Texas or three times the size of France .. and the same size as Iran or Mongolia … and growing larger every day!

These areas of spinning debris are linked together by the North Pacific Subtropical Convergence Zone, located a few hundred kilometers north of Hawaii. This convergence zone is where warm water from the South Pacific meets up with cooler water from the Arctic. The zone acts like a highway that moves debris from one patch to another.

The entire Great Pacific Garbage Patch is bounded by the North Pacific Subtropical Gyre.  The National Oceanic and Atmospheric Administration (NOAA) defines a gyre as a large system of swirling ocean currents. Increasingly, however, it also refers to the garbage patch as a vortex of plastic waste and debris broken down into small particles in the ocean.  The North Pacific Subtropical Gyre is formed by four currents rotating clockwise around an area of 20 million square kilometers (7.7 million square miles): the California current, the North Equatorial current, the Kuroshio current, and the North Pacific current.

The area in the center of a gyre tends to be very calm and stable. The circular motion of the gyre draws debris into this stable center, where it becomes trapped. A plastic water bottle discarded off the coast of California, for instance, takes the California Current south toward Mexico. There, it may catch the North Equatorial Current, which crosses the vast Pacific. Near the coast of Japan, the bottle may travel north on the powerful Kuroshiro Current. Finally, the bottle travels eastward on the North Pacific Current. The gently rolling vortexes of the Eastern and Western Garbage Patches gradually draw in the bottle.

The amount of debris in the Great Pacific Garbage Patch accumulates because much of it is not biodegradable. Many plastics, for instance, do not wear down; they simply break into tinier and tinier pieces.

For many people, the idea of a “garbage patch” conjures up images of an island of trash floating on the ocean. In reality, these patches are almost entirely made up of tiny bits of plastic, called microplastics. Microplastics can’t always be seen by the naked eye. Even satellite imagery doesn’t show a giant patch of garbage. The microplastics of the Great Pacific Garbage Patch can simply make the water look like a cloudy soup. This soup is intermixed with larger items, such as fishing gear and shoes.

The seafloor beneath the Great Pacific Garbage Patch may also be an underwater trash heap. Oceanographers and ecologists recently discovered that about 70% of marine debris actually sinks to the bottom of the ocean.

While oceanographers and climatologists predicted the existence of the Great Pacific Garbage Patch, it was a racing boat captain by the name of Charles Moore who actually discovered the trash vortex. Moore was sailing from Hawaii to California after competing in a yachting race. Crossing the North Pacific Subtropical Gyre, Moore and his crew noticed millions of pieces of plastic surrounding his ship.

No one knows how much debris makes up the Great Pacific Garbage Patch. The North Pacific Subtropical Gyre is too large for scientists to trawl. In addition, not all of the trash floats on the surface. Denser debris can sink centimeters or even several meters beneath the surface, making the vortex’s area nearly impossible to measure.

80 percent of plastic in the ocean is estimated to come from land-based sources, with the remaining 20 percent coming from boats and other marine sources. These percentages vary by region, however. A 2018 study found that synthetic fishing nets made up nearly half the mass of the Great Pacific Garbage Patch, due largely to ocean current dynamics and increased fishing activity in the Pacific Ocean.

While many different types of trash enter the ocean, plastics make up the majority of marine debris for two reasons. First, plastic’s durability, low cost, and malleability mean that it’s being used in more and more consumer and industrial products. Second, plastic goods do not biodegrade but instead, break down into smaller pieces.

In the ocean, the sun breaks down these plastics into tinier and tinier pieces, a process known as photodegradation. Most of this debris comes from plastic bags, bottle caps, plastic water bottles, and Styrofoam cups.

Marine debris can be very harmful to marine life in the gyre. For instance, loggerhead sea turtles often mistake plastic bags for jellies, their favorite food. Albatrosses mistake plastic resin pellets for fish eggs and feed them to chicks, which die of starvation or ruptured organs.

Seals and other marine mammals are especially at risk. They can get entangled in abandoned plastic fishing nets, which are being discarded largely due to inclement weather and illegal fishing. Seals and other mammals often drown in these forgotten nets—a phenomenon known as “ghost fishing.”

Marine debris can also disturb marine food webs in the North Pacific Subtropical Gyre. As microplastics and other trash collect on or near the surface of the ocean, they block sunlight from reaching plankton and algae below. Algae and plankton are the most common autotrophs, or producers, in the marine food web. Autotrophs are organisms that can produce their own nutrients from carbon and sunlight.

If algae and plankton communities are threatened, the entire food web may change. Animals that feed on algae and plankton, such as fish and turtles, will have less food. If populations of those animals decrease, there will be less food for apex predators such as tuna, sharks, and whales. Eventually, seafood becomes less available and more expensive for people.

These dangers are compounded by the fact that plastics both leach out and absorb harmful pollutants. As plastics break down through photodegradation, they leach out colorants and chemicals, such as bisphenol A (BPA), that have been linked to environmental and health problems. Conversely, plastics can also absorb pollutants, such as PCBs, from the seawater. These chemicals can then enter the food chain when consumed by marine life. 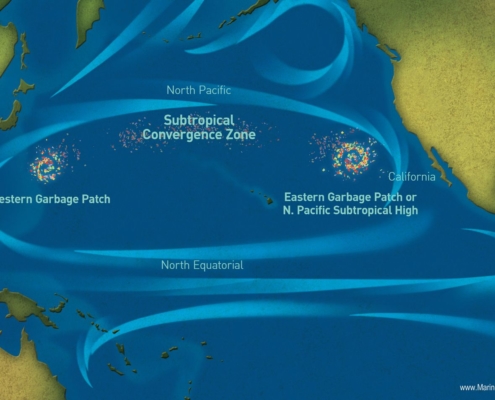 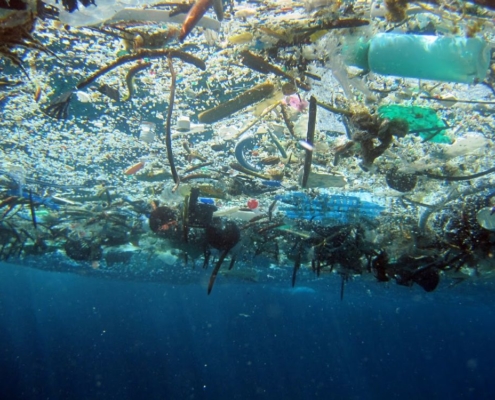 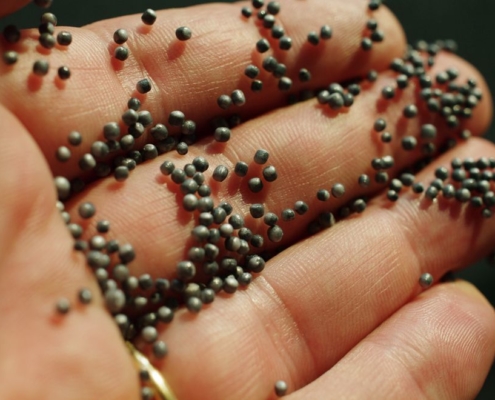 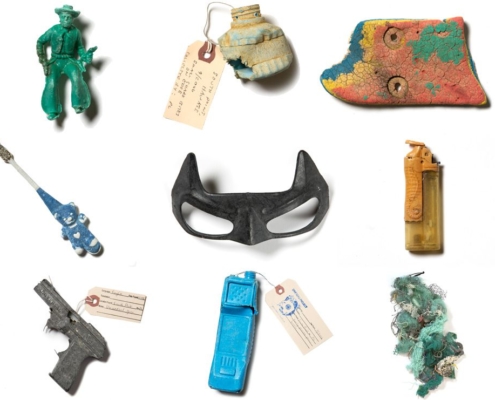 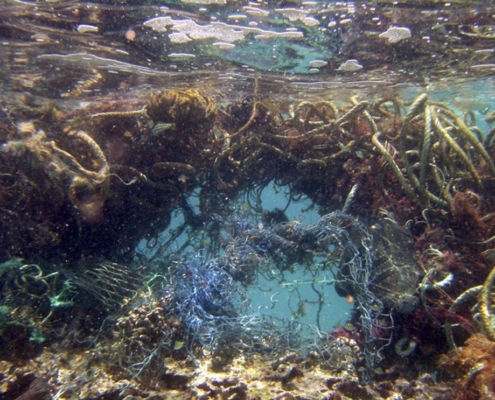 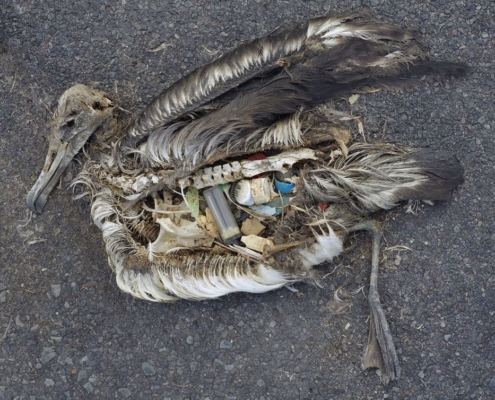 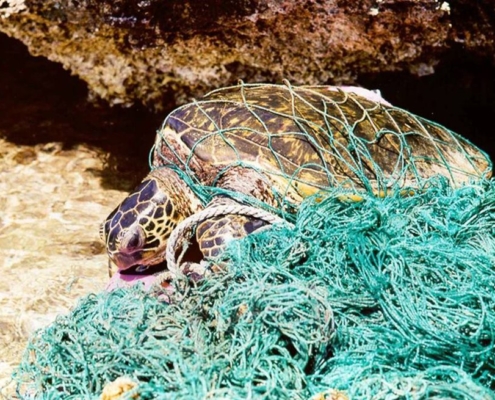 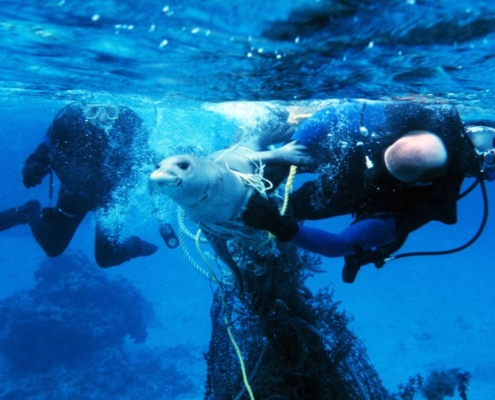 Patching Up the Patch

Because the Great Pacific Garbage Patch is so far from any country’s coastline, no nation will take responsibility or provide the funding to clean it up. Charles Moore, the man who discovered the vortex, says cleaning up the garbage patch would “bankrupt any country” that tried it.

Many individuals and international organizations, however, are dedicated to preventing the patch from growing.

Cleaning up marine debris is not as easy as it sounds. Many microplastics are the same size as small sea animals, so nets designed to scoop up trash would catch these creatures as well. Even if we could design nets that would just catch garbage, the size of the oceans makes this job far too time-consuming to consider. The National Ocean and Atmospheric Administration’s Marine Debris Program has estimated that it would take 67 ships one year to clean up less than one percent of the North Pacific Ocean.

Many expeditions have traveled through the Great Pacific Garbage Patch. Charles Moore, who discovered the patch in 1997, continues to raise awareness through his own environmental organization, the Algalita Marine Research Foundation. During a 2014 expedition, Moore and his team used aerial drones, to assess from above the extent of the trash below. The drones determined that there is 100 times more plastic by weight than previously measured. The team also discovered more permanent plastic features, or islands, some over 15 meters (50 feet) in length.

All the floating plastic in the Great Pacific Garbage Patch inspired National Geographic Emerging Explorer David de Rothschild and his team at Adventure Ecology to create a large catamaran made of plastic bottles: the Plastiki. The sturdiness of the Plastiki displayed the strength and durability of plastics, the creative ways that they can be repurposed, and the threat they pose to the environment when they don’t decompose. In 2010, the crew successfully navigated the Plastiki from San Francisco, California, to Sydney, Australia.

Scientists and explorers agree that limiting or eliminating our use of disposable plastics and increasing our use of biodegradable resources will be the best way to clean up the Great Pacific Garbage Patch. Organizations such as the Plastic Pollution Coalition and the Plastic Oceans Foundation are using social media and direct action campaigns to support individuals, manufacturers, and businesses in their transition from toxic, disposable plastics to biodegradable or reusable materials. 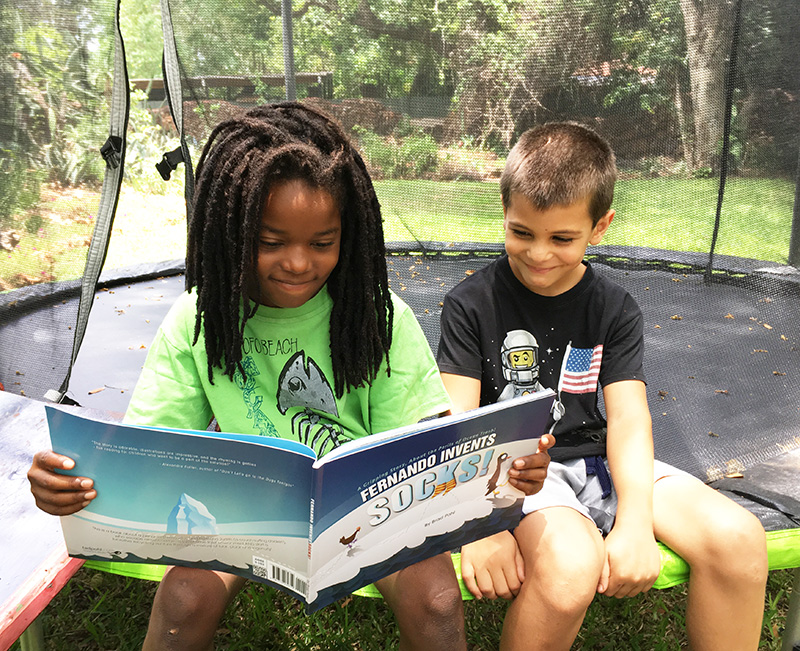 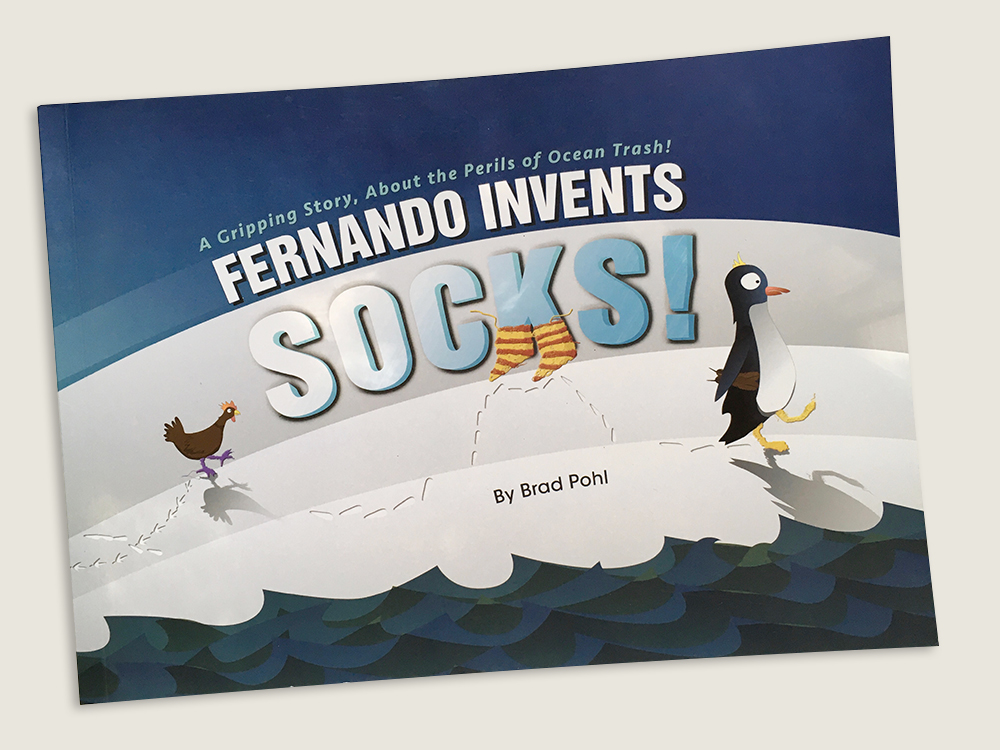 This book is adorable! First of all, I’m a huge fan of rhyme in a children’s book, so that hit home for me right away. 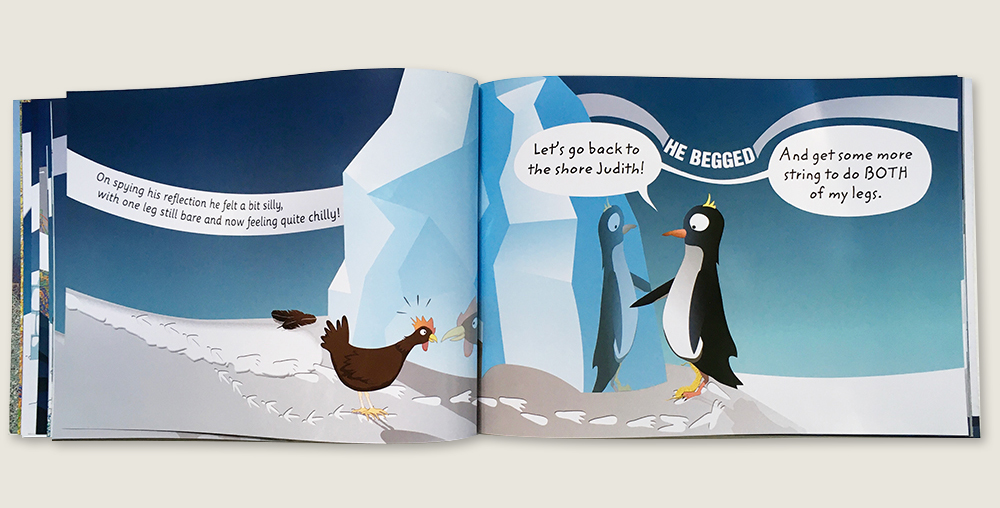 I love that this story fits some of the problems we currently face in the world with all the clutter and trash in the seas and on the poles. 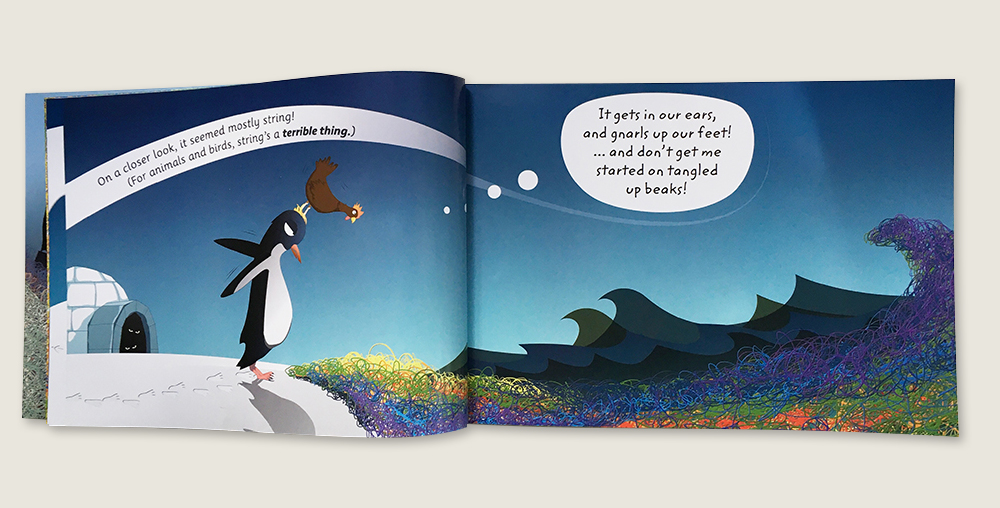 The pictures overall were beautiful and I loved that they were funny as well. I could see a classroom full of kids with smiley faces while reading this book. 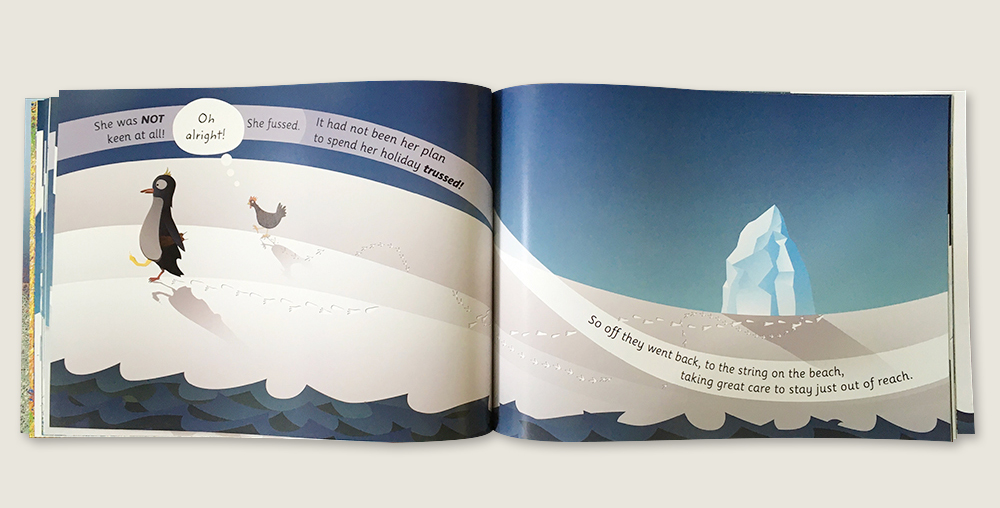 What definitely scored points with me was the pages after the story that provided more information. The teacher in me gets all these amazing ideas for lessons and themed weeks in my classroom. 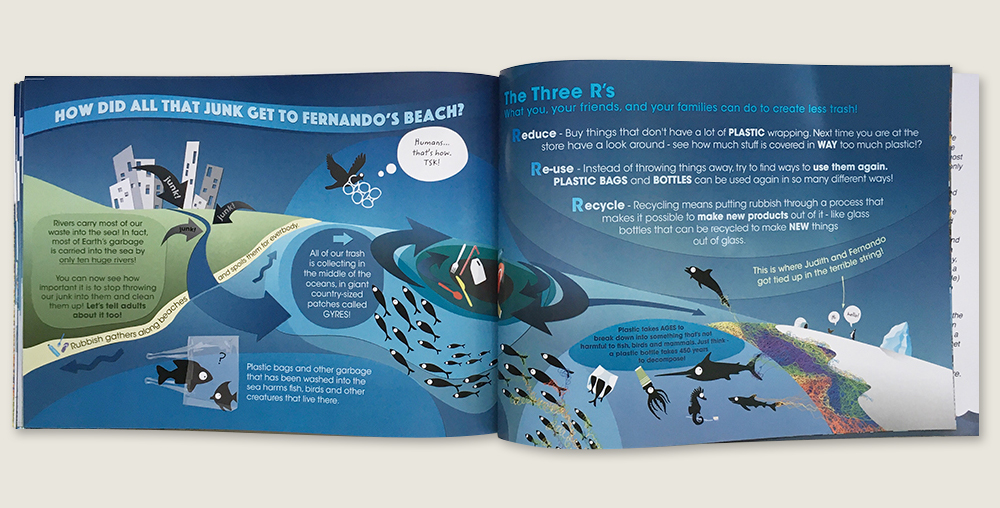